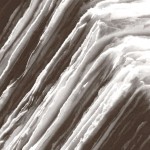 Here’s a good overview of different methods of papermaking from Whittington Press:

Cellulose fibres (plant fibres usually from cotton) are shredded and mixed with water.  The mixture of fibres and water, which is very dilute, is called pulp. It is passed into a vat in which it is agitated mechanically to give an even concentration, The papermaker (vatman) stands by with a pair of moulds. A mould is a rigid wooden frame covered with a fine wire mesh. He produces a sheet of paper by dipping the mould into the pulp and lifting it out with a shaking action. The water drains off leaving a matt of fibres in the mould the outer edges of which is called a deckle. The edge of the sheet is at the deckle, but one gets fibre seepage under the deckle. Thus the edge of the sheet is not a sharp edge, but a rather ragged graduation down to nothing – this is called a deckled edge and is the natural edge obtained when paper is made by hand. Because of the method of manufacture, the fibre orientation is random and there are no significant differences in properties of the sheet in the long or short direction.

Pulp is prepared in the same way as for hand-made paper and is usually of the same high quality raw materials. At the point of manufacture, the process is now automated and the pulp is passed into a vat that contains a rotating cylinder partly immersed in the pulp, again covered in a fine wire mesh. This is the cylinder mould form which the paper takes its descriptive name. As the cylinder rotates, the fibre forms into a matt on the outside of the cylinder. Just after the highest point of rotation and before re-entering the vat, this matt of fibres is couched off onto a felt and removed continuously from the point of manufacture to be further processed. Because of the nature of the machine which is usually run very slowly, although there is a difference in properties between the long and short directions of the paper but not so pronounced as for commercially manufactured machine-made paper.

Again cellulose fibre is prepared to give a pulp in low concentration in water. Commonly, but not always with machine-made paper, the pulp is of lower quality than for either of the above. This is now passed onto a horizontal fast moving wire mesh and the excess water drains through, leaving the sheet formed on the wire. This principle was developed by the Fourdrinier brothers and this type of machine is called a Fourdrinier machine. This machine is accepted today as giving the most economical production and is used to produce large quantities of cheaper paper which are produced at high speed. Because of this normally high speed production, the sheet will show very marked differences in properties between the long and short direction of the sheet.