Some Odd Pages has participated in the annual University of the West of England Bookmarks project since 2011.  Hosted by the Centre for Fine Print Research, this ongoing project aims to encourage work in the format of the artist’s book.

Participating artists each produce an edition of 100 signed and numbered bookmarks which are divided into 100 sets; the sets are sent in distribution boxes to participating host venues around the world. Over the years these bookmarks have been distributed in more than 125 galleries, bookstores, workshops, centres, schools and libraries in Australia, Brazil, Canada, Croatia, Cyprus, Denmark, Egypt, France, Germany, Iceland, Ireland, Italy, Japan, The Netherlands, New Zealand, Norway, Poland, Singapore, Spain, South Korea, Switzerland, Turkey, the UK and USA.  Find out more at http://www.bookarts.uwe.ac.uk/projects/bookmarks.html 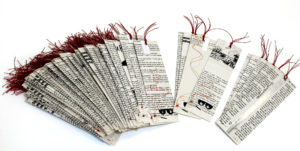 ‘”Evidence Bomb” An appropriated tribute to Hunter S. Thompson’.
Flipping through paperbacks, riffling the pages, sifting, scanning, catching at random phrases; rarely does a book reach out and grab the reader like Hunter S. Thompson’s ‘Fear and Loathing in Las Vegas’. Thompson’s drug-addled account of a 1971 road trip for Rolling Stone Magazine sloshes its way through a ridiculous and dangerous descent into voluntary madness giving grateful readers ‘gonzo journalism’ along the way. This fragmented edition of appropriated pages is respectfully submitted in honour of the wildly hilariously, desparately sad and wholly original Hunter S. Thompson.”

Prose poetry mined through the shape of land, ‘Wordscape’ celebrates the beauty and eccentricity of our (geo)graphically incidental Sense of Place.

This year’s annual Special Edition BOOKMARK for the University of the West of England’s ‘Infiltrating Libraries‘ series has just been shipped to Sarah Bodman, Head of Book Arts for the Centre for Fine Print Research.  More on this ongoing project very soon! 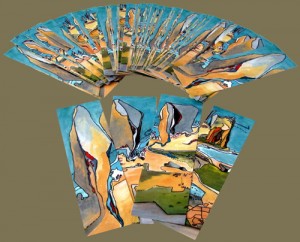 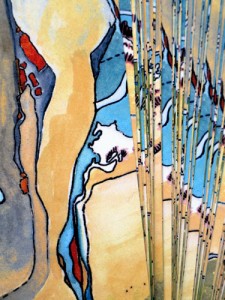 ited Edition bookmark for the UWE Centre for Fine Print Research ‘Infiltrating Libraries’ series.  Created as a set of four linked images, this year’s bookmark sets out a different approach to mapping a sense of place among the ancient landscape in the far west of Cornwall.

This hand printed bookmark was inspired by birches trailing down into asemic writing in the way nebulous perceptions about space, place and environment are organised through coded language.