is an open edition miniature available free of charge.  If you would like your own copy, please use the CONTACT form to send your name and postal address.  You will receive one signed copy of this real paper book in an envelope.  It goes like this: 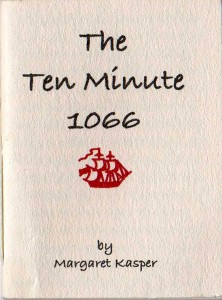 “Once upon a time in 1066, and this was really some time ago, there was a king whose name was Edward The Confessor‘ (he was very religious and confessed his faith in a very public and to some minds rather a morbid way).  This King Edward was king of an island in the Atlantic populated by a great number of men and women who were called, at some point later on, the Anglo-Saxons.  Eventually, as would be expected, King Edward was getting on a bit in years and had always been a rather feeble sort, as Anglo-Saxons go, and one morning on the 5th of January he upped and gave himself a brain seizure and died.  Well, there were the Anglo-Saxons without a king.  But just before he died old Edward mumbled something that sounded a bit like, ‘Harold really should look after things for me when I’m gone, don’t you know.’  Lots of people thought that Harold should then be king of the Anglo-Saxon empire as it were but there were others who didn’t think so at all.  One of these others was called William and he lived in France.  What really put William’s knickers in a twist was that Harold had come to visit him some years earlier and at that time some people had noticed (these were mostly William’s French friends) that Harold told William on that occasion, ‘Look here old bean, you really ought to come over and look after us A-S’s when dear old Eddy pops off.’  So William felt they had struck a deal.  Back in England however, Harold was crowned king just as soon as Edward could be bundled off the old Mortal Coil.  You can thus imagine the state of irritation and general annoyance this put William in, Harold with Edward’s crown and kingdom instead of himself.  Turns out that William was rather a greedy and selfish brute, but very stylish and clever as well.  Off he rides to rouse his barons and the whole lot sail off to England.  They did get hung up by the foggy weather along the channel as they had set out just at the end of the summer warring season. They did finally manage to get across and boy were they ready to have a go at poor Harold when they finally arrived at Pevensey.  Harold meanwhile had not been spending his time toasting the Royal Toes at the castle fire though because some Norwegian blighter, also called Harald (just to make it damned confusing) Hardrada had taken a keen fancy to Edward’s island and decided to have a go at it for himself.  (It was noted that the Hardrada chap had spent the last fifteen years being systematically humiliated by his friends in war, the Danes, who are estimated to have been nearly as lunatic in their methods as the blasted Norwegians.)  So there’s Harald the Norwegian and his beserker axe-wielding army landing on the northern coast of England and off goes Harold the Anglo-Saxon to have a word with them.  All goes very well and a great many of the Norwegian nutters are slain.  Our hero, Harold the A-S stands about on a great pile of dead Norwegians, huffing and panting (those Norwegian blighters were no pixies!) and up rides a messenger telling Harold that there’s some irate French chap coming over the south coast to have a row.  ‘Bloody Hell’ shouts poor Harold, dashes his cup to the ground, stuffs the remainder of a sausage into his mouth and off he goes with what fellows remain after the Norwegians had been put down.  Harold and his mates were dog tired by the time they reached London, having walked all the way from York in three days, but there’s no rest for the weary.  On they went to Hastings where Harold stood out on a hilltop just outside the village and called out the Official Challenge, ‘Well, come on then!’  (Harold’s mates were heard to mutter, ‘Damned foreigners.’)  And so the English squared off against the French who were led by William (who had now taken to referring to himself in the third person by the title The Conqueror, if you please).  Now, the French chaps bore all manner of shiny metal weaponry and had a lot of very beautiful horses on whom they fully intended to charge at the English.  The English had never attempted this kind of approach before and were entirely unused to seeing a load of armed fellows on horseback.  They kept their hilltop as best they could but when William, clever bastard, came out with a special banner from the Pope, Harold and his fellows just wanted to pack it all in; that was simply more than they could take:  William had been and told the Pope that Harold had broken a vow to give up England sworn on some musty old relics hidden beneath the dinner table so many years earlier when Harold had visited him in France.  The Pope had taken William’s side against our poor wretched hero Harold.  Well, as you can imagine, from that point things went from bad to worse.  Harold’s brothers, Leofwine and Gyrth were shot with arrows and then Harold was slain and the English fled.  There was much weeping, tearing of hair and rending of garments.  William moved in and had himself crowned King of England at Westminster Abbey on Christmas Day, 1066.”

Many thanks to David Howarth and his excellent book ‘1066 The Year of the Conquest‘ (Penguin, 1977) whose insightful scholarship and engaging story telling have inspired and educated many grateful anglophiles such as myself.