‘1066 The Bayeux Tapestry’ presents the full Tapisserie de Bayeux in fold-out format along with the original text in Latin accompanied with translation in English and French.  A short preface addresses some of the mysteries surrounding this intriguing artifact of world heritage.
Artist’s Edition of 10, sold out.  © Copyright Meg Green, 2003. 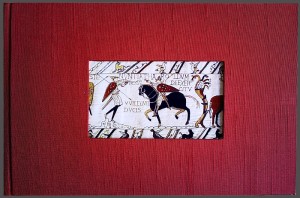 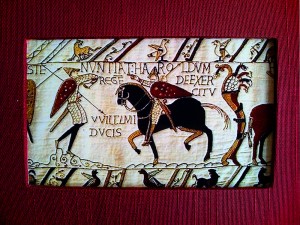 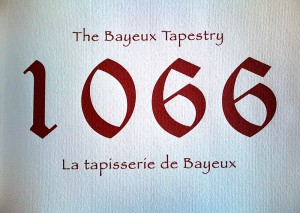 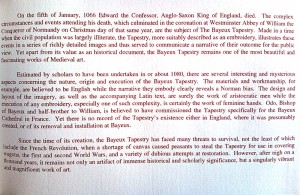 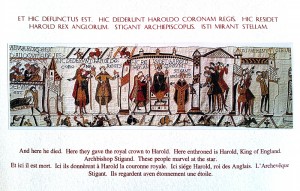 ‘On the fifth of January, 1066, Edward the Confessor, Anglo-Saxon King of England, died.  The complex circumstances and events attending his death, which culminated in the coronation at Westminster Abbey of William the Conqueror of Normany on Christmas day of that same year, are the subject of the Bayeux Tapestry.  Made during a time when the civil population was largely illiterate, the tapestry, more suitably described as an embroidery, illustrates these events in a series of richly detailed images and thus served to form a narrative of their outcome for the public view.  Yet apart from its value as an historical document, The Bayeux Tapestry remains one of the most beautiful works of Medieval art.

Estimated by scholars to have been undertaken in or about 1080, there are several interesting and mysterious aspects concerning the nature, origin and execution of The Bayeux Tapestry.  The materials and workmanship, for example, are believed to be English while the narrative they embody clearly reveals a Norman bias.  The design and layout of the imagery, as well as the accompanying Latin text, are surely the work of aristocratic men while the execution of any embroidery, especially one of such complexity, is certainly the work of femine hands.  Odo, Bishop of Bayeux and half brother to William, is believed to have commissioned the Tapestry specifically for the Bayeux cathedral in France.  Yet there exists no record of the Tapestry’s existence either in England, where it was presumably created, or of its removal and installation at Bayeux.

Since the time of its creation, The Bayeux Tapestry has faced many threats to its survival, not the least of which include the French Revolution, when a shortage of canvas induced peasants to steal the Tapestry for use in covering wagons, the first and second World Wars and a variety of dubious attempts at restoration.  However, after nigh on a thousand years, it remains not only an artifact of immense historical and scholarly significance, but a singularly vibrant and magnificent work of art.